Is the Development Team Key to an ICO’s Success?

Investors around the globe are continuously on the lookout for the golden goose — or in the crypto world, looking for the next Bitcoin. These opportunities could very well appear soon through ICOs: an innovative way for companies to raise capital, for believers to support an idea they would like to see, and for investors to make a fortune.

Is the Development Team Key to an ICO’s Success?

Investors around the globe are continuously on the lookout for the golden goose — or in the crypto world, looking for the next Bitcoin. These opportunities could very well appear soon through ICOs: an innovative way for companies to raise capital, for believers to support an idea they would like to see, and for investors to make a fortune. Just in Q1 of 2018, more than 200 ICOs have successfully raised more than $6.5 Billion; the ICO space in Q1 2018 has already exceeded the amount of successful ICOs and capital raised in 20171.

Selecting a successful ICO is an art. There are so many variables to consider, and determining which ones are important is no easy task. In fact, most of the panelists at the Blockchain Economic Forum in Singapore mentioned that picking an ICO was a very complex endeavor.

Sandiip Bhammer, Portfolio Manager at DiMaio Ahmad Capital LLC, mentioned a few factors used to decide if an ICO is a worthwhile investment:

This template shares many similarities with a template from a study done by ICO Box2.

There are currently multiple models to assess the value of an ICO — with everyone creating their own personal twist. From our conversations with experts in the space and our observations of the current practices, most of the effort is focused on the team, and their ability to deliver on their development promises.

We decided to take a deeper look at the backbone of these companies: the development team — the group that supposedly have the expertise to build the project.

Under our definition of successful ICO3., we analyzed the development teams of the 50 most funded ICOs of Q1 2018 to see if there are patterns to their successes.

Graph 1 shows the distribution of the development team by years of experience for the 50 most funded ICOs in Q1 2018. The data is based on 185 data points4.. 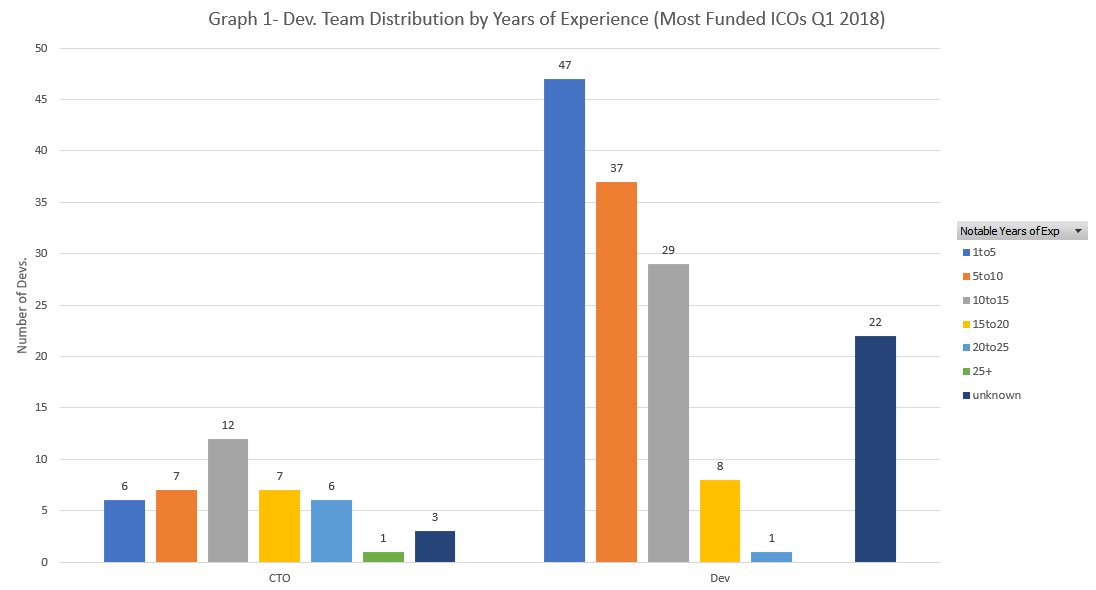 In order to better understand these observations, we decided to compare them to the development team of 50 failed ICOs of Q1 20185..

Graph 2 shows the distribution of the development team by years of experience for 50 unsuccessful (did not reach soft cap) ICOs of Q1 2018. The data is based on 186 data points6..

Data seems to indicate that Development teams for the most funded ICOs of Q1 2018, compared with the failed ICOs, will consist of more experienced individuals, and are lead by CTOs that are more likely to have years of expertise in their field or high academic achievements.

Knowing that successful teams are more likely to consist of an experienced technical team, perhaps the expertise of these teams directly correlate to the amount of capital they are able to raise.

Does a Development team’s experience impact their ability to raise capital?

Graph 3 shows the correlation between a Development team’s average years of experience and the funds raised7.. 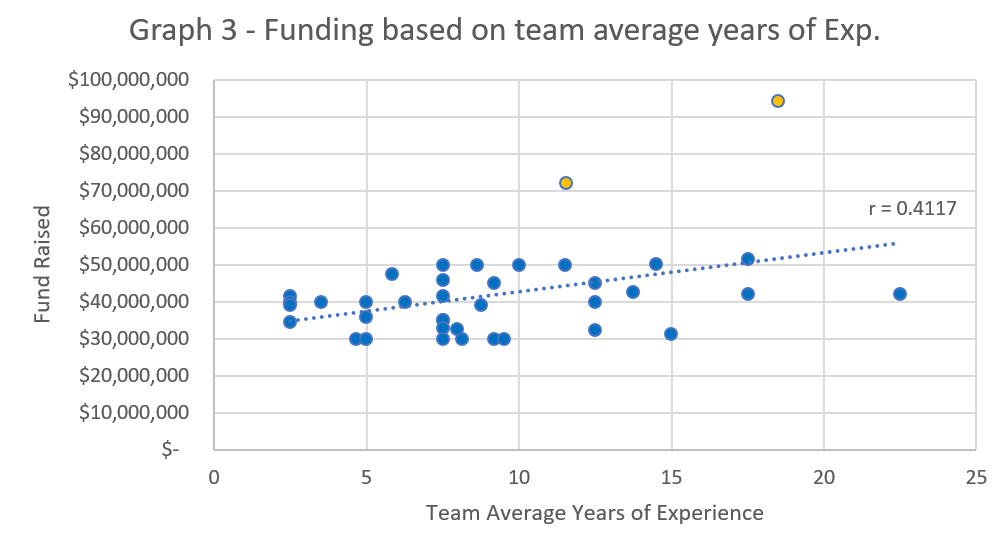 It is worth noting that looking solely at the development team is quite limiting as it does not take into consideration the numerous variables impacting the overall company’s success. However, two interesting observations were found when looking at failed ICOs.

The information regarding the development team was often missing from their websites, whitepapers or anywhere on the web. Additionally, some projects would fail to disclose that they were outsourcing their technical teams.

The Advisors supporting the project were either nonexistent, or providing limited added-value to the team(e.g: local businessmen, non-value added advisors, no prior experience/exposure to cryptocurrencies, etc.).

It would be interesting to further explore the role of advisors in the success of an ICO. Jon Allen, during his “Blockchain at Berkeley”, class mentions that: “a team can lack name/brand value, but can absorb the name/brand value of their advisors”8... This statement is reinforced with a blog by Noem Levenson: “A strong advisory team brings significant value and legitimacy to projects. Relevant advisers bring expertise and insight to a team. In addition, by aligning their name with the project they are putting their reputation on the line — they must have a level of confidence to do so.”9..

3Success of an ICO is based on a company’s ability to reach their soft cap for funding. In this scenario, we assumed that more successful ICOs were the ones that were able to raise more capital, regardless of hard cap or soft cap.

4Team members were created based on their presence in the whitepaper or the website (when nobody was listed on the whitepaper). Their work experience was determined by using Linkedin or team members descriptions.

5In this scenario, we defined a “failed” ICO as one that had not been able to reach their soft cap

6The same methodology was applied as for Graph 1. Wayback Machine was sometimes used to retrieve the whitepaper and team information.

7This was using the data for the 50 most successful ICOs. The table above excludes some clear outliers such as Telegram and Dragon

Consilium Crypto is a big data company that provides quantitative and qualitative insights to market participants in the digital asset space, including funds, family offices and exchanges.

Consilium analyzes 17,000 trading pairs, over 1000 assets, across 50+ exchanges, and tracks trading activity to the millisecond. Our system monitors raw transaction data, as well as complete price and liquidity information from order books around the globe. These data pipelines power our core products, designed to help funds find alpha and place large orders efficiently in times of thin liquidity.

For more information, send an email to info@consiliumcrypto.ai

DISCLAIMER: Consilium Crypto Inc. research and recommendations are meant for educational purposes only and the opinions expressed do not constitute investment advice. Independent advice should be sought where appropriate. The information in this report is provided "as is" and "as available". All information and opinions expressed herein are current as of publication and are subject to change without notice. Consilium Crypto Inc. does not warrant the accuracy of the materials provided herein, either expressly or impliedly, for any particular purpose and expressly disclaims any warranties of merchantability or fitness for a particular purpose. This document is provided for informational purposes only and should not be used for investment decisions. This is not an offer to sell or a solicitation of an offer to buy any security referenced in this document. Consilium Crypto Inc. does not provide financial or trading advice. For any questions or clarifications, please contact info@consiliumcrypto.ai.

Get our stories delivered

From us to your inbox weekly.